This place has given me my life back

My name’s John Biggs, I’m 74 years old and have been married to my wife, Anne, who’s 71 for 47 years and was a horticultural farmer for nearly 30 years. In May 2012, our lives were suddenly thrust into turmoil when I was diagnosed with prostate cancer.

It all started when I was offered a blood test as a check up, and about twelve months later there were still no signs, even after three biopsies. I didn’t have any pain at all but I knew something was wrong.

I’d gone to see a cancer specialist at a hospital I eventually found out that a tumour had been hidden away from what could be seen from the results of my other tests. It turned out to be at a grade 7 stage and that it was inoperable because it had spread out into soft tissue.

I was in so much shock when I found out. I got really depressed from it after finding out and I just didn’t want to speak to anyone about it, nobody. I had radiotherapy every day for eight weeks and I ended up having multiple heart attacks during the treatment from all of the stress, the tiredness, and the travelling to hospital.

It was shortly after the treatment that my wife found out about and persuaded me to come to the Bracken Trust.

Thankfully I’m in remission now but I’ve always got it at the back of my mind about whether it’s going to come back or not, and my wife can tell when I’m not feeling right, but it’s hard to speak to her about it which is frustrating for her. I feel like I’ve already burdened people enough and it’s not easy to ask even more of people. 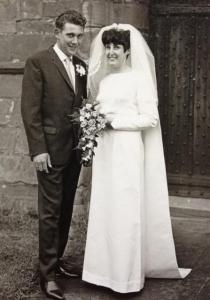 That’s why my wife and I think that The Bracken Trust is such an important place to have, we come every week. There are so many people here that are in the same boat and you can actually talk to them about cancer.

Llandrindod Wells is so rural so there’s not much around here anyway, and the problem with cancer is that you get the treatment, and the people at hospitals are nice to you but after all of that is done you don’t really get any support from them. The Bracken Trust fills that space, and lets people speak to someone and get that emotional support. It’s great to get the reassurance of coming here and getting other help; from massage therapy, acupuncture and other activities.

This place has given me my life back.

I think that National Lottery money being used for places like this, and when you see the benefit that it’s having on the people here, people like me and my wife is amazing. When you think about how there’s no other support around in areas like this then it’s so important to have places like this.

The Bracken Trust was awarded £214,218 through the National Lottery Community Fund’s People and Places programme. For more information about the programme visit our page here.