Caerwedros – success after the flames

On New Year’s Day 2007, Caerwedros Memorial Hall was struck by lightning and the hall burnt to the ground. Today, however, thanks to funding from the National Lottery Community Fund and others, Caerwedros has a brand new Memorial Hall which is a hive of activity, as the Secretary of the Hall, Gareth Ioan, explains.

Seeing the old hall in ashes was a heartbreaking experience. The Memorial Hall was built in 1951 by the rural neighbourhood here in mid Ceredigion to commemorate the local people who’d been lost in world wars. Miraculously, it was possible to save one of the two war memorials from the remains of the hall.

The decision to go about rebuilding the hall was an easy but difficult one. The committee felt a responsibility to do so but were also unsure of the response in this increasing individualist age. Did the area still need a Hall? Did the local people still believe in their local community?

But after holding some public meetings, the decision was made to go ahead; through careful planning and extensive consultation on the need for the hall, which activities would be popular and the design itself. Collecting all the evidence was a long process but the hard work was worth it when sponsorship came from the National Lottery Community Fund and others. The total project costs amounted to around half a million pounds – a significant sum for a small rural community. 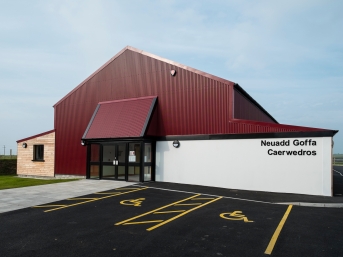 After a year of building work, the new hall was opened in September 2013. A red sink is the most prominent characteristic of the design – which honours the area’s agricultural life and its traditional hay sheds. The freehand staves are another characteristic – a reference to the region’s maritime tradition.

Appointing a part time Development Officer was essential to the success of the scheme. And we had the services of three energetic girls over the past two years – Catrin, Lia and Siân in turn. They were key to the efforts to market the Hall, ensuring that other societies in the area got to use the Hall regularly and easily, and arranging social events which are part of the Hall’s cultural programme. By now, two years after reopening, the Hall is busy with local societies, various classes and regular events being held daily

The highlight of the year in Caerwedros is the annual Produce Show which is held in the Hall. This year’s show was on the 1st of August and was a great success as the entire area came together to socialise and celebrate local successes. A survey was held to gather the opinion of the residents about the Hall. 96% were of the opinion that the Hall had increased local opportunities to socialise; and 94% agreed that the Hall has increased people’s involvement with local groups and each other. 90% were of the opinion that the Hall contributed to their own personal welfare; and everyone, 100%, agreed that Caerwedros Memorial Hall was definitely a great acquisition for the entire area.

Neuadd Goffa Caerwedros was awarded £214,218 through the National Lottery Community Fund’s People and Places programme. For more information about the programme visit our website.